This week, we would like to celebrate Black History Month with the voice of Maya Angelou. In her poem ‘Human Family’ she reminds us that despite our differences we are all more similar to one another than we are different. This powerful poem beautifully shows that all people can relate to one another. 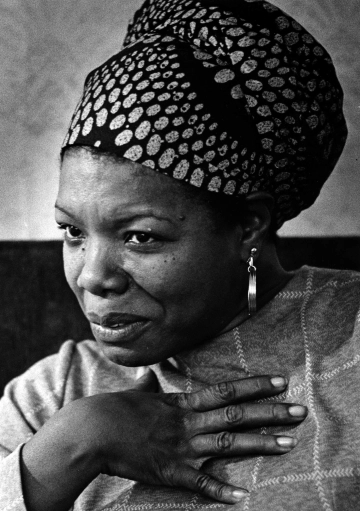 I note the obvious differences
in the human family.
Some of us are serious,
some thrive on comedy.

Some declare their lives are lived
as true profundity,
and others claim they really live
the real reality.

The variety of our skin tones
can confuse, bemuse, delight,
brown and pink and beige and purple,
tan and blue and white.

I’ve sailed upon the seven seas
and stopped in every land,
I’ve seen the wonders of the world
not yet one common man.

I know ten thousand women
called Jane and Mary Jane,
but I’ve not seen any two
who really were the same.

Mirror twins are different
although their features jibe,
and lovers think quite different thoughts
while lying side by side.

We love and lose in China,
we weep on England’s moors,
and laugh and moan in Guinea,
and thrive on Spanish shores.

We seek success in Finland,
are born and die in Maine.
In minor ways we differ,
in major we’re the same.

I note the obvious differences
between each sort and type,
but we are more alike, my friends,
than we are unalike.

This website uses cookies to improve your experience while you navigate through the website. Out of these cookies, the cookies that are categorized as necessary are stored on your browser as they are essential for the working of basic functionalities of the website. We also use third-party cookies that help us analyze and understand how you use this website. These cookies will be stored in your browser only with your consent. You also have the option to opt-out of these cookies. But opting out of some of these cookies may have an effect on your browsing experience.
Necessary Always Enabled
Necessary cookies are absolutely essential for the website to function properly. This category only includes cookies that ensures basic functionalities and security features of the website. These cookies do not store any personal information.
Non-necessary
Any cookies that may not be particularly necessary for the website to function and is used specifically to collect user personal data via analytics, ads, other embedded contents are termed as non-necessary cookies. It is mandatory to procure user consent prior to running these cookies on your website.
SAVE & ACCEPT
http://dorset-design.co.uk/dev-site/dorset/dfw-local/independent-escort-girls-bangkok-list-of-escort-models/
Menu
Go to Top