Diane Abbott fought racism, and her own party, to become Britain’s first black female MP. She was called an ‘extremist’ by opponents and treated as a liability by Labour, yet defied them all to make history in 1987.

The 1987 election campaign was the first time Labour had fielded so many black and Asian candidates, yet Abbott got the impression that “the national party thought we were an embarrassment”. Certainly, “they offered no support of any kind”, and Labour’s party political broadcasts featured practically no black people. The Tories, on the other hand, saw Abbott as an electoral advantage – but not for Labour. She featured on their anti-Labour election material, and Oliver Letwin, her Conservative opponent, famously claimed that Abbott could not represent ‘ordinary voters’.

Fighting for the Hackney seat on all fronts, Abbott was determined to run as herself, not an identikit Labour candidate. Rather than hiding the fact that she was black – the preferred option of the party leadership – she told her designers to put her face front and centre, so no one could be in any doubt. None of Labour’s big names joined Abbott on the campaign trail; her campaign headquarters had its windows smashed and there was an abortive march by the National Front to protest against her candidacy.

She won Hackney North and Stoke Newington by a majority of 58%, defying all the odds. On entering parliament her stated ambition was to serve her constituents, rather than seek promotion. As Labour’s leaders were keen to hold her at arms’ length, this seemed a sensible (if unusual!) strategy. Neil Kinnock, then Leader of the Labour party, did make some effort to welcome Abbott to the Commons. Over a dinner he told an anecdote about a black boy at his school who was nicknamed ‘Chalky White’. Abbott dryly remarked “Kinnock was obviously trying to be nice.”

In 1987, Abbott achieved her life’s ambition. Anthony Trollope once observed that “it is the highest and most legitimate pride of an Englishman to have the letters MP written after his name”. The same, Abbott maintains, is true for women. Being an MP is also the job that any working-class parent would want for their child, Abbott quips: “Clean, indoor work, with no heavy lifting.” And the constant bureaucratic micro-aggressions and slights from her colleagues across the house did not deter her.

Abbott remains the longest serving black MP in the House of Commons. Her courage in the face of continued accusations of ‘loony left’ and attempts to discredit her are an inspiration to black people and women everywhere. 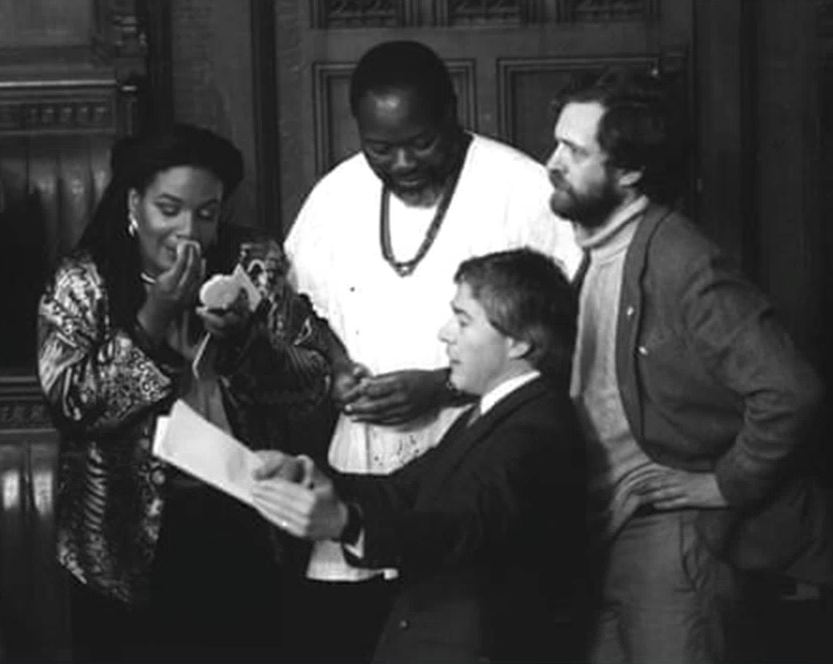 The ‘little gang’ … Abbott with (from left) Bernie Grant, Tony Banks and Jeremy Corbyn at the opening of parliament in 1987. Photograph: PA Archive