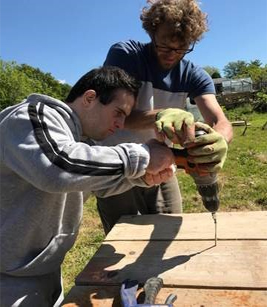 For several months, green-fingered staff and service users from CommunitySpace have been growing plants, fruits and vegetables at an allotment in Barnet.

The team have been hard at work and have actually turned the ‘fruits of their labour’ into food produce they are planning to sell at a local market.

For example, one of the CommunitySpace service users, who is from Greece, makes a delicious pesto from olives and other vegetables and plants that they are growing in their allotment in Cat Hill.

As well as pesto, the CommunitySpace gardeners have made other sauces and are currently experimenting with a cordial. They plan to make enough produce to sell at the Teenage Market in Chipping Barnet, which itself was funded by local crowdfunding organisation Spacehive.

It’s a wonderful example of the work staff do at CommunitySpace with service users to help them interact in the community and lead more independent lives – as well as them becoming involved with another social enterprise – the Teenage Market.

CommunitySpace’s service users are looking forward to sharing their fresh produce via the market – look out for an update on their first day at the Teenage Market… coming soon!

This website uses cookies to improve your experience while you navigate through the website. Out of these, the cookies that are categorized as necessary are stored on your browser as they are essential for the working of basic functionalities of the website. We also use third-party cookies that help us analyze and understand how you use this website. These cookies will be stored in your browser only with your consent. You also have the option to opt-out of these cookies. But opting out of some of these cookies may affect your browsing experience.
Necessary Always Enabled